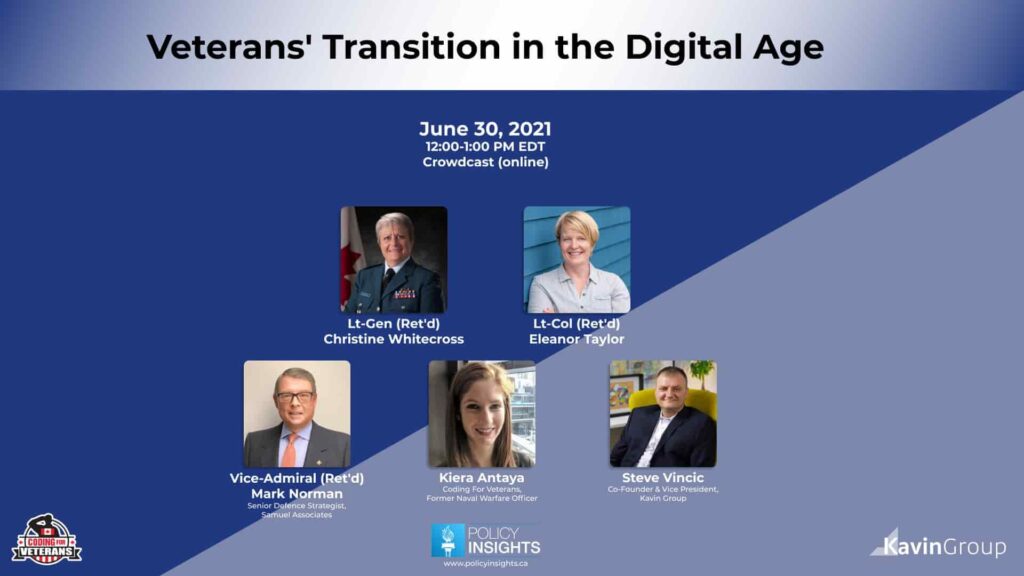 Veterans’ Transition in the Digital Age

To register for this event please visit the following URL: https://www.policyinsights.ca/private-events/veterans-transition-in-the-digital-age#crowdcast-registration →

The Policy insights Forum (PIF), a nonpartisan research division of Samuel Associates, helps improve policy and decision-making through independent research, analysis and engagement. The PIF is honoured to bring together veterans, veteran organizations and thought leaders together to discuss the importance of helping to facilitate the meaningful transition of our veterans into civilian life. As the veteran community becomes younger, the job market becomes more technical and career opportunities become more niche, the PIF seeks to explore the options open to Canada’s veterans in obtaining new skills, effectively utilizing their current skills and networks to their benefit and to discuss the current systems in which the Canadian Armed Forces and society assist veterans find meaningful careers. Our guests and speakers will touch on their personal experiences with this transition, shed light on the evolving job market and discuss how best government and private industry and fit the skills of veterans into post-forces positions that will not only benefit the individual but also the nation.

The Policy insights Forum (PIF), a nonpartisan research division of Samuel Associates, helps improve policy and decision-making through independent research, analysis and engagement. The PIF is pleased to bring together veterans, veteran organizations, thought leaders and industry executives to discuss the importance of facilitating meaningful transitions for Canada’s veterans into civilian careers.

As the veteran community becomes younger and more diversified, today’s job market requires increasing technical skills and experience. The purpose of this session is to explore options open to Canada’s veterans in obtaining new skills, effectively utilizing their current competencies.

Our guest speakers will share their personal career transition experiences, discuss the evolving job market and how best government and the private sector can effectively fit the skills of veterans into new positions that will benefit the individual and the Canadian economy.

She holds a Bachelor in Chemical Engineering from Queen’s University and a Masters in Defence Studies from the Royal Military College of Canada. She is also a graduate of the Advanced Military Studies Course and the Command and Staff Course. An Officer of the Order of Military Merit (OMM), she was awarded the United States Defense Meritorious Service Medal for her service at ISAF HQ, and the Meritorious Service Medal (US) for her service as the International Military Sports Council (CISM) Secretary General. Lieutenant-General Whitecross was named one of Canada’s Top 100 Most Powerful Women of 2011.